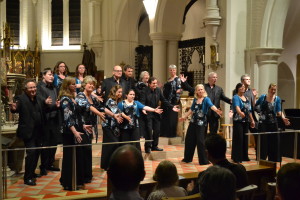 The two Surrey Hills Chamber Choir Summer concerts were entitled ‘Celestial Moments’, and featured a first half of sacred music and a second half of secular songs. Two concerts at St Nicolas’ Church on successive Saturdays seems a lot: but these were two different churches – St Nicolas Guildford and St Nicolas Cranleigh. With the Llangollen International Musical Eisteddfod less than seven weeks away, the choir took the opportunity to perform their competition pieces: the English folk songs, Among the Leaves So Green and Blow the Wind Southerly, and four other assorted pieces, Will Todd’s lyrical Encircled, Zdenek Lucas’s exhilarating Dies Irae, the spiritual Way Over in Beaulah Lan’, and the Creole exhortation to dance, Kalinda, as an encore. But those pieces alone would not have been enough to satisfy our audiences, so Musical Director Debbie Walton added a number of other pieces to demonstrate the choir’s range and to entertain, including a themed set of popular Summer pieces. Both concerts made full use of the church buildings: they began with Monteverdi’s Cantate Domino sung at the back of the church, surprising and delighting the audience, and hopefully not causing too many cricked necks! Then the choir moved to surround the audience on three sides for Palestrina’s Tu es Petrus, which drew an appreciative ‘Gosh!’ from a Cranleigh audience member, with a Guildford audience member commenting that both pieces ‘worked exceptionally well’, with the final chord of Tu Es Petrus being ‘totally magical, a perfect resolution’. The choir now moved to the front, for the first of two pieces employing smaller forces: half the choir sang Tallis’ sublime O Nata Lux, with the remaining members singing Dowland’s Can she excuse my wrongs? later in the concert, complete with indignant gestures and courtly bows and curtseys at the end. Choir and audience members commented how they enjoyed the variety, and the chance to experience the intimate harmonies of the smaller groups. 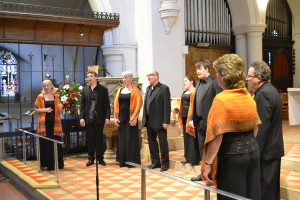 Both concerts included other items interspersed among the Chamber Choir pieces: in Guildford the first of these was Mike Winterbotham singing the aria It is Enough from Mendelssohn’s Elijah – a heartfelt and dramatic piece beautifully performed with sympathetic accompaniment on the cello from Mike’s wife, Sarah. In the second half of the Guildford concert, Christine Parrott sang Lascia ch’io pianga from Handel’s Rinaldo, a performance described by one listener as ‘seemingly effortless, extremely moving and thoroughly enjoyable’. The final extra item in Guildford was an arrangement for vocal quartet of Flanders and Swann’s Ill Wind – the song about an over-enthusiastic French Horn player based on Mozart’s fourth Horn Concerto. Graham Webb made the arrangement, and was joined by Solveig Harris and Andrew Cox, with Sally Varley making a welcome reappearance to take the lead. At the Cranleigh concert the extras were provided by our sister choir, the Surrey Hills Singers. All three of their pieces were beautifully performed, with a lively rendition of the favourite spiritual Joshua Fit the Battle of Jericho, and a suitably chirpy performance of Songbird, but for this reviewer the highlight was their wonderful performance of an arrangement of Lorde’s recent hit, Royals, beautifully capturing the song’s democratic message in favour of the common people, who drive ‘cadillacs in our dreams’ and don’t need the trappings of high society. 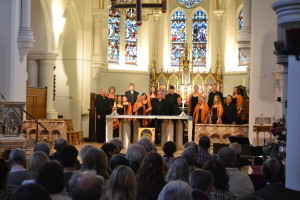 Other songs sung by the Chamber Choir included three songs to the Virgin Mary – Pärt and Rachmaninov’s settings of Bogoroditsye Dyevo – the Russian equivalent of Ave Maria – and Tavener’s Mother of God, Here I Stand. These were sung in the chancel area which in Guildford especially allowed the choir to enjoy a different acoustic, allowing for softer, more rapt singing, greatly appreciated by the audience. Another spiritual, Good News, accompanied the Llangollen bound Beaulah Lan’ . These were great crowd pleasers in both venues, judging by the audience reaction. Scarborough Fair complemented the other folk songs; and to finish with, the themed Summer pieces were Here Comes the Sun, Summertime, When You Wish upon a Star, and Blue Moon. These allowed the choir to show a lighter side, with the tenors perched on stools at the front for the last three pieces, showing off as all other choir members know tenors love to do; and Blue Moon caused a stir when the basses all donned sunglasses a few bars into the piece – a nod to the bass in the pop group Shawaddywaddy who wore sunglasses whilst singing his “ba ba ba ba’s”. Special thanks go to Giulia Draycott, who stepped in at very short notice for the Summertime solo in Guildford, when Carol Foussat had to withdraw with laryngitis, and to Carol herself for her solo in Cranleigh, despite being barely recovered. 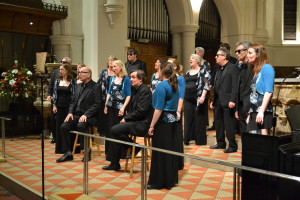 Audience reactions were thoroughly positive, with particular comments on the excellent presentation and variety of repertoire. Everybody came away satisfied, with the choir buoyed up for Llangollen, especially considering at least five members being unable to sing because of health problems.   Jeremy Whittaker