The Chamber Choir embarked on their first venture away from home in May 2008 by competing at the Cheltenham Music Festival. Some got up at the crack of dawn and travelled for the day, whilst others all piled into Jane’s van and drove up for the weekend. Whichever avenue people took, the trip provided a great opportunity for everyone to get to know each other better during the day and also at the pub afterwards – a vital part of choral camaraderie! 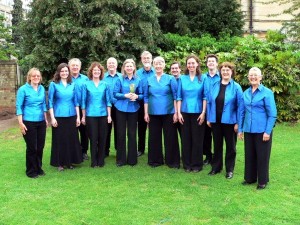 The Cheltenham Music Festival is a well-established festival with a choral section that is well attended and where the adjudicator is always a choral expert. This year, the adjudicator was Robert Latham, who is a choral conductor, singing teacher and choral arranger. He is particularly renowned for his work with treble choirs and his school choirs regularly featured on BBC TV and radio programmes.

There were six choirs who entered this year and the majority of them were well over 50 in number making it easy for them to fill the large stage and make a big sound in the very ornate town hall. We felt very small and exposed in comparison to these large choirs, but knew we made a good contrast. We entered four classes and each time we performed in a new class our confidence and performance level grew.

The glowing feedback from the other choir members and audience to our singing, and particularly our unconducted aspect, was very exhilarating and we were thrilled to end the day with one first place, two second places and a third place. However, we wouldn’t be honest if we didn’t confess we were disappointed not to receive first place with our musical class as Robert Latham gave such positive comments and our songs contrasted very strongly with what every other choir had sang, but it was not to be. Our only consolation was that the Wessex Male Voice Choir applauded us as their delegate collected the cup to show they felt we should have won instead!

Robert Latham was a good adjudicator, giving all choirs very detailed critiques on their performances and points that they could improve upon. He passed on a lot of expert advice, including tips on improving singing technique, and we all found the day extremely enjoyable and informative. As a new choir, the day was an important turning point in cementing us from a group of individual singers into a cohesive choir.

Below are some of the very positive comments we received:

Spirited and rhythmically sound. Some excellent moves…… over all this really difficult arrangement was really well negotiated!! Stylish in many ways!

A gentle and accurate opening made us all listen carefully. The many tricky passages were well-negotiated. You sang through the false ending with admirable concentration! Doo’s especially good from the men – lots of strong rhythmic foundation here. A strong performance overall!