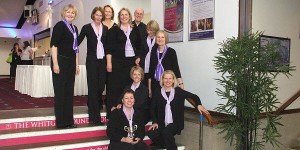 The Surrey Hills Singers are delighted to return home from the Croydon Music Festival 2011 with wins in all the classes entered, including receiving the Grace Whitney Memorial Trophy for the Ladies Class.

The smaller of the three Surrey Hills choirs, we are proud to continue the winning tradition of the Surrey Hills Chamber Choir, demonstrating that talent is found in small packages too! We are a non-auditioned group of ladies who love to sing and are delighted that our teamwork, commitment and hard work has been recognised at the music festival level with such praise. Of particular importance was the adjudicator’s comments relating to stylistic performance and emotional portrayal of the detail dictated by the score.

We entered three classes and kicked off the day with the Ladies Class where we sang “Two Songs of Henry VIII” and the contrasting “Yo Le Canto”, with its fiendish accompaniment brilliantly played by our accompanist Robert Gillman. The adjudicator, Ben Costello, said:

Two Songs of Henry VIII
“You all brought character and energy to the delivery. There was distinctive contrast in the second section and more subtlety, but pitching remained secure.”
<h4>Yo Le Canto</h4>
“Yo Le Canto had a good deal of energy and was very emotive. Harmonies were well honed and notably well supported. Stylistically you delivered the piece very well, and went some way to convey the drama of the text. Most captivating.”

This was followed by the Light Music Class where we sang one of our favourite songs from Phantom of the Opera which always brings tears to the eyes of the audience, “Wishing you were somehow here again”. To contrast, we performed the snazzy, upbeat sixties number “Son of a Preacher Man” with a rock solid solo performance from Helen.

Wishing you were somehow here again

“This was an excellent performance. Wholly musical with excellent use of colour, tone, blending and tenuto.”

Son of a Preacher Man

“This was a suitably sang delivery with excellent, supportive moves and backing vocals with a lovely opening solo.”

To complete the trio of classes, we concluded with the Sacred Class which comprised of our most technically difficult song and also our newest, favourite song.

“You negotiated the hurdles in the Poulenc well; those key changes were well-controlled and you maintained a sweetness (dolce) throughout. A performance with an understanding of the text and style.”

“Excellent solo work here with some very well supported harmonies and backing vocals. A suitably folk-like and spiritual delivery worked very well here. The contrast on the repeated “too late’s” was magical.”

The final comment was very well received as Debbie had only stopped us at our final rehearsal to point this word and its significance out and we were rather pleased we all remembered to portray it in performance conditions and to hear the emotive effect from the adjudicator.