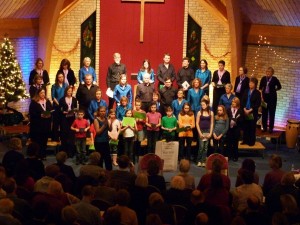 The three Surrey Hills choirs joined together for their annual Christmas concert on 5th December 2009 and the change of format and venue resulted in our most successful concert to date.

We were delighted to hold the concert at the new Cranleigh Baptist Church, where the facilities, intimate performing area and comfortable chairs were a big hit with our audience. The church, already adorned with a large Christmas tree in the entrance, was beautifully decorated with lights, and a second tree positioned near the stage provided a cosy, warm and seasonal setting.

This year, Surrey Hills decided to change the format and hold a concert with more seasonal content where 50% of the concert was dedicated to Christmas carols and songs, as well as carols for the audience. This change was greeted with high enthusiasm from the audience, many whom expressed their pleasure afterwards about the opportunity to sing.

All three choirs gave excellent performances. The concert started with a bang, with all choirs performing together the African song “Jabula Jesu”, with percussion accompaniment. The Surrey Hills Young Voices’ performance of the tongue twister “Peter Piper” so astounded and delighted the audience that their gasps and loud applause nearly frightened the children! The Young Voices also sang a beautiful ballad, “I Give you a Song”, which was extremely moving. As well as singing canons and partner songs, the children have developed their singing to include harmony singing. The feedback from their performance was extremely positive, with a unanimous agreement that it was their best performance to date.

The Surrey Hills Singers also performed to a high standard and received many positive comments. We had a number of new members this term, yet the blend of the voices was perfect. The opening of “Wishing you were somehow here again” sounded like one voice. This was a very moving performance, as was the classic “Hallelujah” by Leonard Cohen. The Singers finished with the popular “Is this the way to Amarillo?” – always a song to put a smile on the face since Peter Kay’s version! The Singers’ programme also included some wonderful solos from Jennifer, a professional singer who is currently a full-time mum enjoying the camaraderie of singing with others. The Singers’ performance was extremely well received, particularly by a lady from Elmbridge Village who is very keen for the group to perform to the residents. It is so rewarding for the singers to hear such glowing comments after all their hard work.

Our new accompanist, Robert Gillman, accompanied both the Singers and Young Voices and we are so pleased to have him on the team. He played brilliantly and gave us so much support and security.

The Chamber Choir has grown yet again this year to 19 members. Their programme was extremely varied, from Byrd to Annie Lennox, and included their first performance of a new contemporary song “The Sounding Sea”. They opened their set with the infectious “Nothin’ gonna stumble my feet”, a contemporary pastiche of the traditional spiritual. Their programme also included a performance of the folk song arranged for them by Gwyn Arch, “She moved thro’ the Fair”. This is a stunning arrangement and the performance created a magical atmosphere. We are so pleased to have it in our repertoire. The set ended with a powerful rendition of “Sweet Dreams” with choreography to match the driving rhythms and words. The choir has really bonded and the standard of their performances has not only been recognised at competitive music festivals but also by the music committee of the Guildford United Reformed Church, who have invited us to perform at one of their professional recitals in the future.

The Christmas half of the concert opened with a joint song by Bob Chilcott, “Where Riches is Everlastingly”, which created a great atmosphere and also an antiphonal effect as the ladies stood around the audience with candles. Each choir performed some lovely carols and Christmas songs. “Down in Yon Forest” by Michael Miles (member of the Chamber Choir) was a real favourite with the children. The Singers gave a fabulous rendition of “Carol of the Bells”, and the Chamber Choir’s  pièce de résistance was the spooky and jazzy “Follow that Star” by Peter Gritton. The audience sang the carols with great gusto (we are sure there are some closet choral singers out there), and their clear enjoyment was very uplifting for the choirs. The concert closed with all choirs singing goodnight with a song by Guy Turner, “The Holy Hand”.

The concert was highly attended with 177 people in the audience, and we’d like to thank all of them for supporting us and for all the wonderful feedback afterwards at the concert party. This year not only were the singers on a high, but the audience was too! It was a very memorable evening.

We look forward to seeing you at our next Christmas concert on Saturday 11th December.