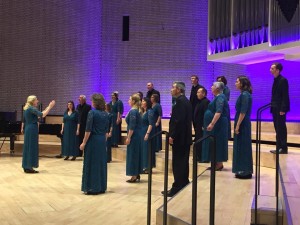 The Manchester Amateur Choral Competition 2018 took place on the 10th and 11th February 2018, and the Surrey Hills Chamber Choir took part in a celebratory concert in St Peter’s House chaplaincy on the Saturday Night, and the competition itself, in the splendid auditorium of the Royal Northern College of Music on the Sunday afternoon.

For the Saturday Concert, we were one of six choirs who took the opportunity to meet together and enjoy each other’s company and music before the rigours of the competition the next day. Among others these included the Bristol Show Choir, which as its name suggests focussed on songs from musicals, the Rossendale Male Voice Choir, and the favourite for many Surrey Hills members, Crystal Chords, a ladies choir based in Stockport.

Our set included six songs, beginning with the spiritual, Down to the River, for which we entered singing from various parts of the hall, inviting the audience ‘Down in the river to pray’. We showcased the variety of styles and eras of our repertoire with Hassler’s Renaissance piece, Verbum Caro, MacMillan’s modern cathedral anthem, O Radiant Dawn, contemporary Norwegian Composer Ola Gjeilo’s magical Ubi Caritas, and the Kings Singers’ arrangement of John David’s You are the New Day. Finally, we returned to the crowd-pleasing favourite, Danga’s Romanian folk song Sirba n Caruta, complete with expertly choreographed dancing from the ladies and rather more rough and ready prancing from the gentlemen of the choir.

The fifteen minute set for the competition on the Sunday was put together by Debbie to show the choir’s versatility, starting with Eric Whitacre’s With a Lily in Your Hand. The choir had sung this several years previously, including in Barcelona, and once again we were able to wow the audience with the mixture of the fiery Spanish rhythms and the fluid romantic passages. Comments from the judges included ‘Terrific opening – very Punchy indeed!’ and ‘Effortless execution of the tricky chords.’ One judge even commented that ‘on my card this song was the best of the whole day at the MACC’ – high praise indeed!

Next was Schnittke’s Gospodi, a Russian Orthodox prayer for mercy. This ‘required an immense amount of energy and control to deliver,’ according to one judge, ‘which you did with spades!’ Then we sang Hilary Campbell’s setting of Blow the Wind Southerly. While the adjudicators’ comments were not quite as lavish as for the first two pieces, they did praise ‘some really good ensemble singing here’ and the excellent tuning, especially given the complexity of the piece.

We finished with Sydney Gillaume’s Haitian Creole piece, Kalinda. We were all aware that the start was not our best, with the acoustic of the hall making it difficult to hear each other and blend the tuning, nevertheless, we recovered after a few bars and gave ‘a lively rendition with good dynamics and excellent precision’ according to one judge, with another commenting ‘What a way to finish – great stuff!’ Overall one adjudicator said, ‘You’re a really fine group singing impressively hard material.’

There were some members of other choirs who said they thought we would win, but overall we knew that the opening of Kalinda probably scuppered our chances of coming away with a prize. Despite this, we were very proud of our overall performance, especially of Lily and Blow the Wind, and took away a lot of encouragement from the experience. For several choir members this was their first competition with the choir, and they all acquitted themselves magnificently.

As always, we are all immensely grateful to Debbie, not only for training us up so expertly but also for her hard work making the arrangements for the weekend.