Retirement of our accompanist, Robert Gillman 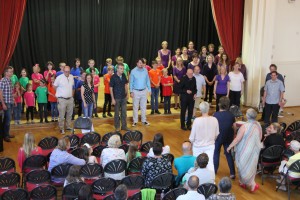 Robert Gillman has been a wonderfully skilful, sensitive and patient accompanist for all the Surrey Hills Singing School choirs for a number of years. He has accompanied the Chamber Choir and Singers for Christmas concerts, as well as the Young Voices and Training Choir in joint family concerts. As many of the Chamber Choir as were able joined together to form a flash mob to surprise Robert at the end of his final concert as accompanist in Cranleigh 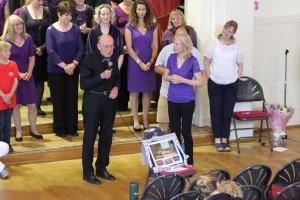 Village Hall in July. The piece Debbie chose for us to sing was Down to the River to Pray, which we were able to start seated all round the auditorium, after most of the after concert notices and thankyous had been given. Robert was not the only person present moved to tears as more and more singers made their way singing to the front to shake his hand, and it was a rare treat to hear Debbie herself sing the final solo line. Robert was also presented with a number of gifts, including a framed photo of recent choirs and lifetime tickets to Surrey Hills concerts. It was an honour and pleasure to be part of a memorable send off for such a humble, gracious and lovely friend of the choir.