Sell Out for Local Concerts

Summer 2010 saw the Chamber Choir taking a break from their traditional annual summer concert in order to begin preparing repertoire for their first complete concert in June 2011. The choir therefore took the opportunity to take some current repertoire, as well as the new repertoire, to new audiences in the local area. With performances on successive nights over the weekend of 19th and 20th June, concerts were organised for the residents of Ewhurst Village and Elmbridge Village. Both concerts were extremely well attended, with the Ewhurst concert being sold out before the doors even opened! 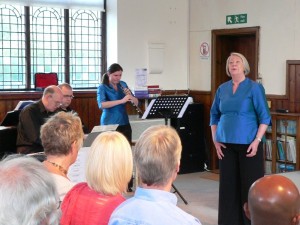 The concerts were supported by the Surrey Hills Singers and members from both choirs also contributed solo and group items: Panis Angelicus, O Mio Babbino Caro, Scarborough Fair, Fair Phyllis, and Music of the Night. The Chamber Choir men provided their usual “men only” contribution with a rendition of When I’m 64. Melanie also accompanied two songs with oboe obligato to provide even more diversity to the programme.

Audiences from both events expressed their surprise and delight at the evening’s entertainment. Comments such as: “it wasn’t at all like the choral concert I was expecting. I shall definitely come to all your future concerts”; “It was fantastic, why haven’t we heard of you?” and particularly the glowing comments from Sally Beecham, the organiser at Elmbridge Village: “the best we have ever had perform for us. The communication, presentation and choreography were just wonderful”.

The Chamber Choir gave a very atmospheric performance of the contemporary and challenging song “The Sounding Sea” at Ewhurst. When they repeated the song at Elmbridge, the stamp (to represent the crash of waves) was so loud on the wooden staging that it made one audience member literally jump a foot in the air! However, the violent storm did not detract from the beauty of the song and the atmospheric ending. SHCC also performed a set of folk songs that represented the four corners of the British Isles – England, Scotland, Ireland and Wales. The popular and musical items were particularly well received by both audiences. The choir’s current arrangement of Blue Moon incorporates the humorous Shawaddywaddy bass line, whilst the mischievous musical revue “Ain’t Misbehaving” gave a classic ending to the choir’s programme and first attempt at choreography!

The Surrey Hills Singers repeated some of their favourite songs from the May concert with great success. The opportunity to sing the songs three times in two months showed the truth of the words “singing a song into your body” as the singers were extremely relaxed and confident with the repertoire and consequently performed brilliantly. As at the May concert, the ballads – “The Lily and the Rose” and “Wishing you were somehow here again” – were spine tingling and, like the Chamber Choir, the 1930s-1940s songs were particularly enjoyed by the audience. It was wonderful to see people mouthing the words and one gentleman even put up his hand to catch the kiss we blew in Bei mir du Schön.

Both choirs really enjoyed the opportunity to sing to two sets of new audience and we look forward to seeing them at our December concert.