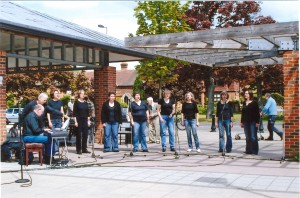 The Surrey Hills choirs were invited to participate in an event organised by Waverley Borough Council to promote Cranleigh’s shops and local groups. The Surrey Hills Singers and Young Voices both participated in the event and performed in Stocklund Square. Luckily the sun shone brightly and amplification was organised so that we could be heard above the traffic and hustle and bustle of the shoppers.

It was a great day and performing with mics made the singers feel like a pop group! Both choirs were well received by the audiences and a number of people joined the choirs afterwards at the Methodist Church for their workshops. It was the first outside public performance for both choirs and we’d like to thank Emma Treeby for all her efforts in organising the event.