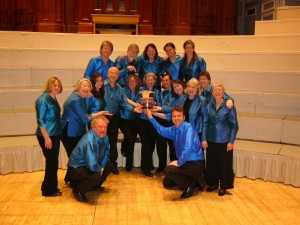 Celebrating on stage after their class win

The Surrey Hills Chamber Choir are thrilled to return home from the prestigious Mrs Sunderland Music Festival with two trophies. This competition attracts choirs from all over the UK and consequently this is our highest accolade to date. Needless to say, the celebrations went on well into the early hours of the morning!

The day started with the choir assembling in our allocated warm-up room (as opposed to a corridor or car-park!) to prepare for the Small Choir class. We arrived early in order to watch the preceding class, learn the format and protocol of the competition and to adjust to the large, but beautiful, Town Hall. On hearing the first adjudication, we were pleased to learn that the adjudicator, Stanley Rooley, was looking for all the points Debbie had been telling us over the past few weeks – the performance begins from the moment you stand up from your seat, accuracy of the score, phrasing, different colours and moods etc etc.

In the Small Choir class, our competitors were the very experienced Irish choir, Loughside Chamber Choir. A group of young women aged around 18-25, whom Debbie had previously met when competing in the Final of Choir of the Year in 2000. We performed “Daemon Irrepit Callidus” and “Into Thy Hands”, whilst Loughside sang “Fruh Morgens” by Rheinberger and “Fix You” by Cold Play arranged by their conductor. We thoroughly enjoyed Loughside’s performance. Although a very small choir, each member had good projection and they blended together beautifully. Their rendition of “Fix You” was very moving. Although we came second in this class, we were delighted that the adjudicator expressed the view that he had rarely heard such outstanding singing from a chamber choir, let alone two! Both choirs were awarded the grade “Outstanding”, but he named Loughside the winners, but only by a “pip and a squeek”. We were very pleased with our performance against such tough opposition and delighted with his comments:

The afternoon class comprised seven choirs, with a diverse range of forces and numbers, from 80/100-strong male voice choirs to a small youth choir. We sang a very contrasting programme: the very new and contemporary “The Sounding Sea” by American composer Eric Barnum, “She moved thro’ the Fair” arranged by Gwyn Arch especially for us, and finally the King Singers’ classic “I’m a Train”. “The Sounding Sea” is our newest piece and we felt it was our best performance to date. The wooden stage underfoot enabled the stamping, to create the crashing of waves, to work very effectively and the acoustics of the hall really helped us portray the composer’s interpretation of the Sea. At the end of the song we were very aware of the total involvement of the audience as they listened intently as the last “pffff” of the final wave faded away. “She moved thro’ the Fair” ebbed and flowed as one voice and achieved a wonderful atmosphere, whilst the choreography and cheeky facial expressions (inspired by face of Thomas the Tank Engine) delighted the audience.

We hoped very much to be placed in the top three, but were over the moon to be selected as the winners of such a large class that comprised such a high standard of choral singing. We were again awarded the highest grade possible, “Outstanding”.

“You explore the melodic and technical vocal inflections to bring the music alive – excellent grading of dynamic parts throughout the piece. Artistic performance – such a lovely tranquil close. It has the intense and calming elements.”

She Moved thro’ the Fair

“Free and flexible in delivery and with expressive mood in the quality of tone in ladies and mens voices, beautifully controlled.”

“Fine rhythmic content, clarity in diction – total commitment from all.”
“A well selected programme, some exceptional and technical elements.”

With this win we qualified to participate in the evening gala concert. There was an additional criteria of “entertainment” in this performance. We chose to sing “The Sounding Sea” and “Nothin’ gonna Stumble” because we felt the former was our best performance and we needed to couple it with a fresh song.  However, in hindsight we would have chosen two other songs!! The Welsh Male Voice choir gave an extremely entertaining performance with audience participation and the adjudicator decided that entertainment was his highest priority and awarded them the winners.  The two ladies choirs – Loughside Chamber Choir and Opus 44 – who both performed very demanding pieces, received second and third place respectively.

However, all was not lost as unbeknown to us there was another award and trophy for best song of the whole day and this was awarded to us for our performance of “She moved thro’ the Fair”. If only we had known the adjudicator’s criteria was entertainment and the folk song had been his favourite song, we would have repeated Fair and Train. But hindsight is a wonderful thing!! We had a great day musically and a great weekend socially and look forward to our next choir trip away together.