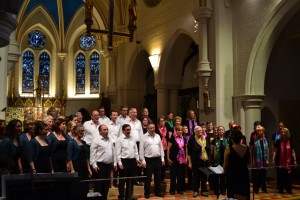 On a sultry summer night in Guildford, the Surrey Hills Chamber Choir joined with Impromptu, the award-winning ladies’ choir from Sutton, in a delightful concert with pieces ranging from Renaissance motets to contemporary settings of popular favourites. 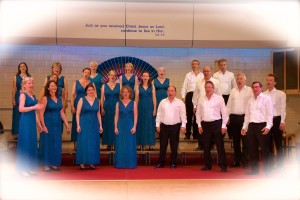 This concert, in St Nicolas’ Church on Sunday July 1st, was the second of two joint concerts, following Saturday’s performance in St Paul’s Church, Cheam. The repertoire was similar for both, the only difference for the Chamber Choir being that we began our set in Cheam with Down to the River, a Kings’ Singers arrangement of a spiritual that we have been performing for a year now, that grabs the audience’s attention as singers appear from various parts of the auditorium to lead the song as they make their way to the stage.

Impromptu delighted the audience with their beautiful tone and tightly focused singing in a wide range of styles, including among others the choral favourite, The Bluebird by Charles Villiers Stanford, the lively Mexican folk song, Las Amarillas, complete with syncopated clapping, finger clicking, yips and yelps, and beautifully mellifluous performances of Over the Rainbow and He was Beautiful. As the flautist from the Saturday concert was unavailable on Sunday, Giulia Kapp from the Chamber Choir stepped in to accompany He was Beautiful, and did so beautifully.

As for Surrey Hills Chamber Choir, we sang a mixture of some established pieces from our repertoire, and some new pieces which are being prepared for future competition performance. Hassler’s Verbum Caro Factum Est from 1591 with its lively counterpoint and mix of dance rhythms and melodic phrases opened our Sunday set, and was followed by Mendelsohn’s Richte Mich Gott, Schnittke’s Gospodi and Gjeillo’s Ubi Caritas, all of which we have sung at previous concerts. One lovely aspect of the audience’s comments after the concert was that the varied repertoire clearly went down well, with appreciative comments for all the different pieces. Richte was praised for its beautiful rich tones; Ubi Caritas for its stillness and focus, and a wonderful comment on Gospodi, with its enraptured contemplative atmosphere, was that it was simply too short – the audience member wished it could have gone on for much longer. 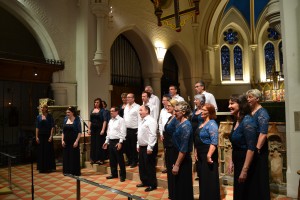 Total Praise, Richard Smallwood’s modern spiritual, is a new piece for us – we heard and Italian choir sing it in Vienna, and have now made it our own. It is a deceptively simple piece that builds and builds as the choir move towards the phrase ‘I lift my hands in total praise to you’. During the rehearsal process all the choir members have managed to overcome their British reserve so that on the night we did indeed lift our hands in true Gospel style. Audience comments included praise for the ‘whole-hearted commitment’, comments on ‘how impressive the ensemble was’, and simply that they ‘loved it’!

Ezekiel Saw de Wheel ended the first half of the Chamber Choir’s set. William Dawson’s arrangement of this traditional spiritual is lively, engaging and a real crowd-pleaser. Some of the words are very hard to make head or tail of, recording as they do the prophets mystical vision of a strange heavenly chariot, but that didn’t hinder the audience’s enjoyment, judging from the whoops and hollers from the audience at the end. 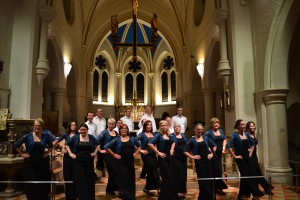 In the second half of the concert we moved to more secular repertoire, which provided the opportunity for individual choir members to shine with some solo passages in several songs.  First, however, came another new piece, Rit Jau Jabut, Rihards Dubra’s setting of a Latvian poem by Ojars Vacietis. The poem evokes a foggy, mysterious night in Riga, and the different sections include rapturous chordal sequences, a complex, energetic fugue, some still, calm melodic passages and a quietly exultant ending. After that came a suitably summer-themed piece, with Tina Turpin providing a sultry solo for Summertime, followed by These Foolish Things, featuring Nick Murza and Solveig Harris, and Blow the Wind Southerly, with Solveig again on duty as a soloist, providing the final, plaintive solo. Rutter’s lively, intricate setting of Sing a Song of Sixpence marked the formal end of the concert, though the choir did put on their Romanian dancing shoes to sing Sirba n Caruta as an encore complete with elegant choreography from the ladies and a brave attempt from the men.

Overall, it was another hugely successful concert. Audience comments included ‘truly spectacular’, ‘very engaging’ and ‘Incredible energy from both choirs’ – as usual, we have Debbie Walton to thank for guiding us to such a well-received performance.