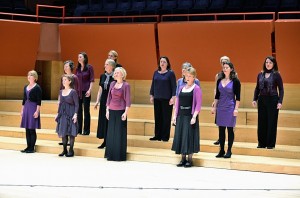 Two accounts of the day by choir member.

Well never let it be said that The Surrey Hills Singers can’t accept a challenge! When we agreed that it would be good to set ourselves the challenge of entering a competition, I don’t think we quite had in mind being entered for such a prestigious event as the national Choir of the Year Competition! Following in the footsteps of the Surrey Hills Chamber Choir was going to be a tall order but with due optimism, dates for the initial auditions (and subsequent knockout rounds) were written into diaries and built into our Monday morning rehearsal schedules was practice of the chosen pieces for the competition.

Our first song choice, Las Amarillas, an arrangement of a traditional Mexican Song, full of energy complete with yips, yelps, and hand clapping, a challenging piece, previously performed by us a couple of years ago was resurrected to contrast with a new song, Jar of Hearts, a tender ballad sung with emotion and defiance and which has become a firm favourite of the choir.

As the competition date approached, it was apparent that anxiety levels were rising. Would we master the tricky syncopations, the cross rhythms in the handclapping for Las Am?! Would we be successful in communicating the emotion of Jar of Hearts to a panel of professional judges and a critical audience of fellow competitors? How would we equip ourselves to perform on an unrehearsed stage in an unfamiliar environment with unknown acoustics? Mental preparation became the mantra!

And so the big day arrived, as we set off early on a chilly grey April Sunday morning for Basingstoke. Under strict instructions to do no talking on the journey, our poor drivers had to listen to a catalogue of

sobby dog and siren noises as we did our best to lift the soft palate! Standing in the cold in the shopping centre, overcoming our embarrassment at causing a certain amount of wry amusement to passersby, our vocal warm up continued until the theatre opened up and we were able to find a corner for a last minute run through.

Into the auditorium and after an entertaining welcome and warm up to put the participating choirs at their ease the competition began. All too soon we were waiting to go on stage. Some deep breaths and we were on. And there it was. Done. And we were receiving a warm, enthusiastic round of applause. Smiles all round, but what would the judges say. An anxious moment whilst we waited for their comments. Relief and pleasure. We were hearing phrases like “an intense, special start, wonderful giving stage presence, well done”. We walked off the stage with heads held high, proud of our performance and the shared memory of an extraordinary experience. 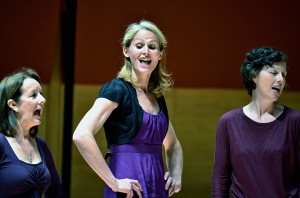 COTY was without doubt the hardest personal challenge I have had in a long time and I would not have missed it for the world. We did not get through the audition round, but we were all pleased that we gave one of our best performances of a very challenging piece and an excellent performance of a popular contemporary number. There was a wide selection of choirs and styles and the whole experience was a nerve wracking, but also fun and I got a great buzz.

This has been my first year with Surrey Hills Singers and I love it. There is such a lovely friendly atmosphere, everyone is very supportive and there’s an eclectic selection of music. I cannot read music, so I learn the songs and tunes from recordings supplied by our musical director Debbie.

She has the highest standards and she makes this a choir where every member feels important to the whole, and every member strives to do her best.