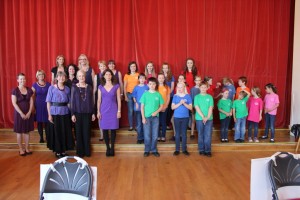 The summer family concert is becoming a favourite with the local audience as its wonderful mix of ages provides so much diversity and interest for the audience. It also provides the perfect platform for the young choirs to watch and learn from the adults.

The concert opened with Adele’s Rolling in the Deep, performed by all choirs, but with the main vocals being taken by SHYV. The Young Voices continued with their own selection of songs which were delivered with such power, commitment and enthusiasm that it was commented on by many afterwards. It’s so rewarding to see these youngsters perform with such confidence and abandon and without the inhibitions normally associated with being a teenager. Comfortable with each other and within the Surrey Hills setup, singing in a choir has taught them how to be a performer. Many members of the choir also had a solo during the evening and each member also introduced an item in the programme.

Starting with three songs on a spooky theme. Little Shop of Horrors, a 1960s style song from the musical of the same name, was accompanied by the hand jive and narrated by Lottie; Double Trouble is a tricky song from Harry Potter’s 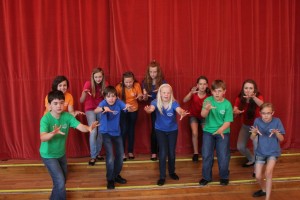 The Prisoner of Azkaban . The text is the witches spell from Macbeth and the choir portrayed putting the horrifying ingredients into the cauldron brilliantly. The verses had some difficult notes to pitch and were sung very well by Ben, Mattie, Rebecca and Lola. The Ride of the Witch – a two part canon – concluded the opening set.

The other three songs in the first half were of different styles and moods. Rutter’s A Clare Benediction was chosen to improve the legato singing of the choir with soloists Lottie and Lola setting up the mood perfectly. Wade in the Water introduced the choir to a spiritual and how slaves exchanged escape messages through song. Soloists were Joe, Jess and Anna. Finally, Firework by Katy Perry, one of the choir’s favourite songs, concluded their first half set. 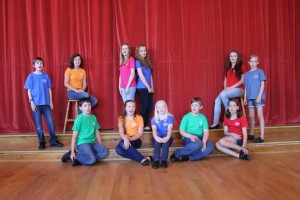 SHYV opened the second half in style, dressed in fine coats, hats or stoles, we were transported to Ascot for the Ascot Gavotte from My Fair Lady. To the audience delight, the choir used “posh” accents and reinacted the sounds of the horses running and the reaction of the race goers to the result with posh “Hurrah’s” and disappointed “oh’s”. Colours of the Wind, a lyrical and haunting Disney number, created a special atmosphere, whilst Rebecca, accompanied by the choir, got the audience toes tapping with the spiritual O Happy Day. Returning to pop songs, the choir had requested Pack up your Troubles by Eliza Doolittle. The boys took the ostinato part for the verses and choreographed the performance. The choir then sat in a group formation to perform the beautiful Hushabye Mountain from Chitty Chitty Bang Bang with soloists by Mattie, Ben and Joe. 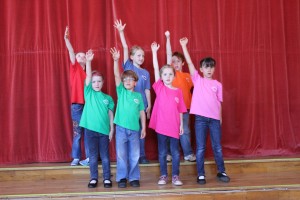 The Training Choir comprises 9 children, 7 of which were available to perform. They are learning the tools for singing in a choir before progressing to SHYV and certainly provide the “ah” factor at every concert. They sang “Good to be me”, a song which teaches children the importance of self-worth. With audience participation and each child having a solo, the performance was one of the highlights of the evening. In the second half they sang Let’s go fly a kite from Mary Poppins. The children had each decided what their kite would look like, where they were flying it and what the weather was like in order to learn how to communicate a song to the audience. It was “practically perfect in every way”. To conclude the children’s half, both choirs sang If I only had a Brain from the Wizard of Oz. This song contained intricate choreography from the film which the choirs performed to perfection! 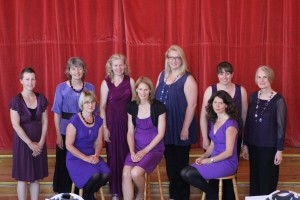 The Surrey Hills Singers (mum’s choir) provided an excellent programme of contrasting music. The voices of the ladies blend so well together and the performance was acclaimed as their best to date. Songs in their first half included the upbeat and joyful Israeli song Hava Nageela with the syncopated descant provided by Jennifer Ward; the lilting and lyrical English song by Michael Head The Ships of Arcady which describes Arcadia – the place poets use to describe as an idyllic place; the well-known trio Lift Thine Eyes from the oratorio Elijah by Mendelssohn; a contemporary Latin setting of Salmo 150 – a short and very upbeat number that was enjoyed by the audience and was one of the songs sung by the winning ladies choir at Llangollen last year!; a contrasting lilting English folk song, A Bunch of Thyme, followed, with first time soloist Shelley Forrester setting the scene. Finally, the delightful upbeat and fast spiritual Ride the Chariot concluded the first half, with Jennifer Ward as soloist.

Before the Singers performed their second half set, Jennifer Ward sang “The Way you Look Tonight”. Jennifer has been with the choir for 5 years and is a trained opera singer. The concert was to be her last and the audience really enjoyed hearing her solo item. The Singers have really appreciated learning from Jennifer during the years she has sung with us and have loved the enthusiasm and energy she brought to every rehearsal. 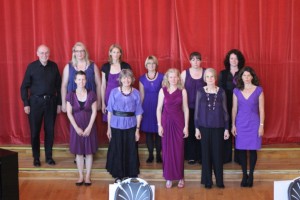 To start the second half the Singers opened with a medieval Rondellus (a round) called Flos Regalis – a style of music that suited them perfectly – and followed this with 3 songs from the small song cycle This Day by Bob Chilcott. This is a lovely work with contrasting songs which was well received by the audience. The Singers concluded with two popular songs, first the contemporary Someone Like You by Adele. This was a very moving performance and Helen Evans set up the song beautifully with a heart rendering solo. In contrast they ended with the upbeat 1940 Andrew Sisters classic Boogie Woogie Bugle Boy. The cheeky expressions and military salutes brought big smiles to the audience faces who responded with very loud applause at the end of the set.

All choirs returned to the stage for the encore with a song that aptly expresses how all singers feel – Thank you for the Music. The concert was followed by an end of year short party with food and drink which everyone, but particularly the young performers, tuck into enthusiastically – the perfect end to a summer’s concert.