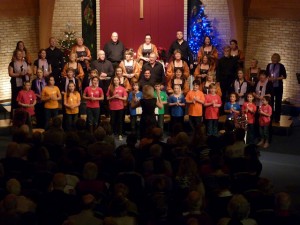 The Surrey Hills choirs’ joint Christmas concert forms an integral part of Christmas in Cranleigh. We were thrilled that our Christmas concert was a sell-out within moments of putting up advertising flyers. Our problem now is finding a venue big enough in the Cranleigh area for our growing band of followers.

The chamber choir and the Surrey Hills Singers prepared two focal pieces this year: ‘Rytmus’, by Ivan Hrusovsky, and sung by the Surrey Hills Chamber Choir, positively flew along with its tortuous repeated phrases and pulsing underlying rhythm. The piece is fast with carefully co-ordinated staggered breathing rehearsed by all sections to suggest a seamless flow of sound. The choir was on a knife-edge with this piece, which has been one of the most challenging to learn of any of our contemporary pieces in recent years.

We were thrilled to have with us Debbie Walton’s latest addition to the Surrey Hills Singing School: the three members of the newly formed training choir. These Key Stage 1 children sang a dear little song, ‘Alice is One’ to a huge cheer of approval. The older children, Surrey Hills Young Voices, also have a number of new members and entertained us with a number from 42nd Street as well as ‘Don’t Stop Believing’, ‘No Matter What’, ‘Let it Snow’ and ‘I saw three ships’.

Soloists this year were: Christine Parrott, who led us into Karl Jenkins’ popular ‘Adiemus’, which we all sang in the round; Jennifer Ward, who sings with the Surrey Hills Singers, singing ‘Schlof mein Kind’; Diane Smith in the Singers’ rendition of ‘Over the Rainbow’; and Giulia Dracott singing a mellifluous descant in the chamber choir’s rendition of ‘Steal Away’, with our tenor Tony Watson as soloist in the two verses of this moving spiritual. 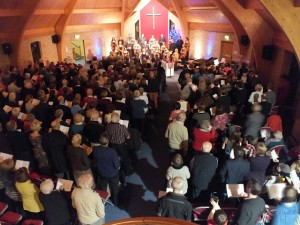 Many of our songs are first prepared for the Christmas concert to ‘try out’ in front of our friendly local audience, and if they go down well we spend months more polishing them to competition standard. Holst’s ‘Song of the Blacksmith’ is one such number. We will be performing it next year in the Folk class at the prestigious Llangollen Eisteddfodd, whilst Rytmus is also destined for the BBC Choir of the Year audition round at Basingstoke in February. It’s going to be a busy year for the chamber choir and the competition will be fierce, but we are now at the stage where we need to experience competition at the highest level.  We all enjoyed singing the audience participation carols.   However we regained a sense of inner stillness for John Tavener’s ethereal ‘The Lamb’ and found a joyful gospel sound for our closing number, Ruth Morris Gray’s ‘Have you seen the baby?’.

Many of our performances are available on YouTube. Do feel free to type in Surrey Hills Chamber Choir and see what comes up.