Selling tickets wasn’t the problem – it was holding back the hordes! Tickets for families and friends sold before we’d even got the posters up, and after the Surrey Hills Chamber Choir win in the adult category of the Choir of the Year Competition, choral music fans from much further afield were clamouring for tickets. Nearly all the Surrey Hills choirs have expanded, so more friends and family needed to be provided for, and added to the portfolio is the new Glebelands in Harmony school choir, which was invited to join the Singing School for our Christmas entertainment. The original Cranleigh Baptist Church venue for our joint Christmas concert proved too small. What to do? Turn music lovers away or change venue? After some frantic pondering, Mrs Hutchinson, the headmistress of Glebelands School, suggested we hold the concert in the school hall. With choirs standing in the foyer until it was their turn to sing, we just managed to accommodate our enthusiastic Christmas audience.

Mike Winterbotham, with his splendid ability to project his bass-baritone voice, was roped in as Concert Manager to ensure our morning rehearsal went smoothly and choirs were well-drilled in efficiently getting on and off the stage. In the evening, whilst choirs got into position, Simon Jones filled in the gaps with brilliant repartee.

The choirs, numbering some 70 singers in all, only just managed to squeeze onto the stage for the joint opening songs for each half: Adele’s ‘Rolling in the deep’ and the fun ‘Christmastime’ by Michael Smith and Joanna Carlson. 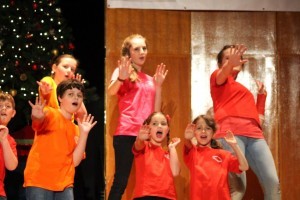 The adorable Surrey Hills Training Choir – a group of five pre-schoolers – stole our hearts with ‘I once saw an elephant’, a memory song in which more and more animals and their sounds get added to the list of things seen. The Training Choir stood on the stage and held their nerve whilst conductor Debbie Walton rushed out of the concert hall in the midst of a coughing fit, singing with full confidence after a three-minute unplanned interval!

Snuffles threatened to floor the Surrey Hills Singers, a daytime group of nine women singers. I stepped in at the last minute to sing a part (with score!) after one of their number lost her voice. Jennifer Ward was magnificent as the soloist in the spiritual ‘Ride the chariot’. The singers also sang a moving rendition of ‘The ships of Arcady’ by Michael Head.

Surrey Hills Chamber Choir put together a programme that included songs from its recent triumph in the Choir of the Year Competition, including ‘Rytmus’ by Ivan Hrušovský, ‘Sounding sea’ by Eric William Barnum, ‘Double, double, toil and trouble’ by Jaakko Mäntyjärvi, and ‘My soul’s been anchored in the lord’ by Moses Hogan, a spiritual which we never seem to get tired of singing and which suits our celebratory mood and the homophonic style in which we excel.

In the second half the audience was introduced to Glebelands in Harmony for the first time. This group of fourteen secondary school-aged young people has been performing for one school year so far. It was unanimously agreed that the standard they have reached in such a short space of time is staggering. They sang a gentle song, ‘All on a silent night’ by Becki Slagle Mayo, which incorporates the traditional tune of ‘Silent night’ as a counterpart to the melody. Sarah Winterbotham played a sonorous cello accompaniment.

It would be too numerous to mention all the songs sung for this special Christmas concert. I hope you’ve had a taster here. The Surrey Hills Singing School Christmas concert has become a traditional outing for a great many people in the Cranleigh area. And the feast that follows is an integral part of this special evening. But what makes this concert particularly special is in fact the carols that intersperse the set pieces. With harmonies and descants sung with ease by these able singers the audience particularly seems to enjoy participating without inhibition, and for many the support the choirs can give them vocally has rekindled a love of joyous carol-singing. It is our gift to Cranleigh.