The Surrey Hills Chamber Choir’s summer concert was a joint venture with Ishani Bhoola’s four piece Waverley Ensemble. Audience and choir got to listen to wonderfully warm and engaging performances of pieces by Corelli, Telemann and Handel, and the choir were also able to expand on their usual repertoire of unaccompanied choral pieces. Musical Director Debbie Walton decided this was the perfect opportunity to perform a longer work, Joseph Haydn’s Missa Brevis Sancti Joannis de Deo, also known as the ‘Little Organ Mass’. Under Debbie’s direction the choir skilfully captured the varied moods and colours of this delightful piece, with a highlight being Susan Lee’s performance of the Benedictus, a moving dialogue between Soprano soloist and organ.

A great strength of the choir has always been its ability to sing in a wide variety of styles, and this concert showcased that adaptability fully, with pieces drawn from the seventeenth to twenty-first centuries, and genres including Renaissance polyphony, spiritual, modern classical, folk, and pop-influenced arrangements. 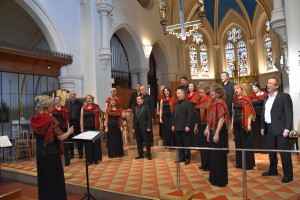 own to the River to Pray drew the audience in by having soloists walk in from various parts of the church, before the choir joined together in chorus at the chancel. Two very different Latin pieces followed. Monteverdi’s motet Cantate Domino is a joyful and exciting example of Renaissance choral music, demanding the ability to sing in sustained, sonorous lines at times, but with trippingly light passages elsewhere. The choir’s enjoyment of the rich beauty of the piece came across strongly to the audience. By contrast, Ian Assersohn’s recent setting of Soles Occidere, part of an ode by Catullus, is an ethereal and reflective exploration of the brevity of human life, which journeys from an expression of delight in the beauty of sunset and sunrise to a pianissimo meditation on the unending night of death. It calls for great control and commitment from the choir if it is to be effective, and as an added challenge, the composer himself was in the audience. Thankfully the performance pleased both composer and audience, with many complimentary comments afterwards. Most pleasing of all, Ian Assersohn tweeted appreciatively later in the evening of the performance of his piece by the ‘startlingly good’ Surrey Hills Chamber Choir.

Susan Lee was also the soloist in Franz M Herzog’s Time to Leave, a pop ballad style elegy written after the death of a friend of his. Debbie always emphasises the need for story-telling and connection with the audience in all the choir’s performances; unusually in this piece, but fitting the mood of grief and coming to terms with loss, she instructed the choir not to make eye-contact, but to sing, at least at the start, as if lost in their own world of grief. Again, a number of appreciative comments from the audience afterwards showed how effective this approach was. 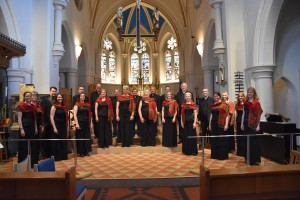 It was good to revisit James MacMillan’s modern motet, O Radiant Dawn, a choir favourite, which captures perfectly the yearning excitement of Isaiah’s prophecy of light shining in darkness. Stacey Gibbs’ arrangement of the spiritual Way Over in Beaulah Lan’ brought the first half to a rousing climax.

Two pieces new to the choir provided excellent opportunities for powerful choral story-telling. Rock musician John David’s You are the New Day, as arranged for the Kings Singers, explores the fear of nuclear destruction of our fragile planet, and American choral specialist Eric Barnum’s Sweetheart of the Sun is a beautifully lyrical setting of a poem by Thomas Hood. The poem is a love song based on the Biblical Story of Ruth, but manages to be very topical as the story of a starving refugee who finds a home in a new country. 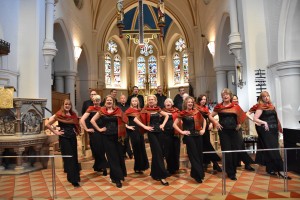 ntrasting folk songs brought the concert to an end: Hilary Campbell’s arrangement of Blow the Wind Southerly is another choir favourite that always brings a great response from the audience with its plaintive story of hope and disappointment, and Gheorghe Danga’s Sirba-n Caruta is a boisterous and humorous celebration of dance. The exhilarating, fast paced music combined with some lively, flirtatious choreography brought the concert to a rousing end.