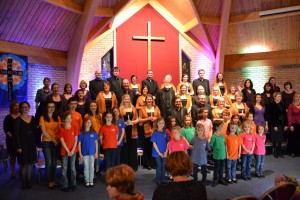 On Saturday 6th December in Cranleigh Baptist Church, the audience was treated to wonderful performances from all Surrey Hills Choirs, from the youngest to the most experienced. As part of the commemoration of the centenary of the outbreak of the First World War, all the choirs joined together in a lively arrangement of ‘It’s a Long Way to Tipperary’, complete with soloists representing old soldiers remembering the war and children marching in to join the adult choirs. 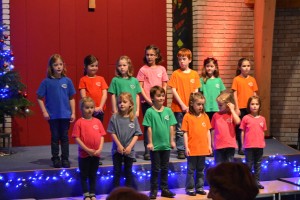 A series of wonderful turns from the younger choirs followed, with the Training Choir performing Daisy Bell beautifully; the young soloists for individual verses deserving special praise for their confidence and accuracy. The Surrey Hills Young Voices and Surrey Hills Teens then performed a medley of First World War songs: hearing the young voices singing ‘Keep the home fires burning’ was one of the most moving moments on both evenings. ‘I Won’t Grow Up’ from the musical of Peter Pan, showcased the choreography that Musical Director Debbie Walton has brought to aid the storytelling, and which is such an impressive feature of all Surrey Hills choirs. ‘My Heart Will Go On’ sung by Lola Ashwood and Ellie Glenn proved what great individual talent Debbie has nurtured among the young singers on top of the beautiful choral singing.

After this, it was time for the adult choirs to shine: The Surrey Hills Singers showed their versatility with pieces from the 17th, 19th, 20th and 21st centuries, ranging from the exuberance of Purcell’s ‘Rise Up Singing’ to the emotional intensity of Coldplay’s ‘Fix You’, and rounding off with ‘Don’t Rain on my Parade’, with both vocal performance and choreography suitably lively and precise. 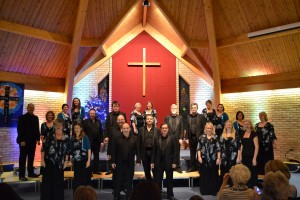 The Chamber Choir wrapped up the first half with one 16th and two 21st century pieces: an expressive, lyrical rendition of Palestrina’s ‘Tu Es Petrus’ sandwiched by the explosive praise of James MacMillan’s ‘Data Est’ and the intricate rhythms and percussive voice effects of Sydney Guillaume’s ‘Kalinda’.
The second half of the concert was dedicated to Christmas music. ‘Run to the Manger’ saw all the choirs take the stage together for an exuberant American piece in the gospel and spiritual tradition, before delightful performances of ‘Winter Wonderland’ from the Young Voices and ‘Love Shone Down’ from the Training Choir.

The Surrey Hills Singers again showed their versatility with the movingly devout ‘Carol of the Star’ followed by a nostalgic reminder of the 1950s with the delightful ‘Mister Santa’.

The Chamber Choir’s Christmas contributions began with three pieces crafted into one carefully choreographed whole. First the ladies of the choir placed around the body of the church sang Lyn Williams Festive Alleluia, a magical surround sound effect for the delighted audience; then the men sang an arrangement of Silent Night in German and English, put together before Sainsbury’s advert used the same idea, and finally the ladies sang as they moved forward to join the men for ‘Carol of the Bells’. David Willcocks’ arrangement of the 15th century ‘Lullay my Liking’ with the plaintive chorus interspersed with more passionate expressions of the Christmas mystery from five lady soloists was followed by John Rutter’s exhilarating arrangement of ‘Deck the Hall’. After warm applause from an appreciative audience, the evening was rounded of by all the choirs joining together for John Rutter’s ‘Christmas Lullaby’.
Sunday’s concert saw many of the same pieces performed in the lovely setting of St Nicolas’ Church Guildford, with scores of lit candles on window ledges adding to the atmosphere; the audience greatly appreciated the parents of Training Choir and Young Voices singers coming over to repeat the First World War pieces at the beginning of the concert. The Guildford audience, in addition to many of the same pieces performed on Saturday by the adult choirs, were also treated to Ralph Vaughan Williams’ ‘The Oxen’ for baritone soloist expertly sung by Mike Winterbotham, accompanied by Sarah Winterbotham on cello and Giulia Draycott on flute.
Once again, the audience thoroughly enjoyed the commitment and musicality of all the choirs, and the varied and uplifting programmes put together by their director, Debbie Walton, who deserves the plaudits and gratitude of all concerned.